At this northeast market, Indians of all faith mix in a way they wouldn’t at home 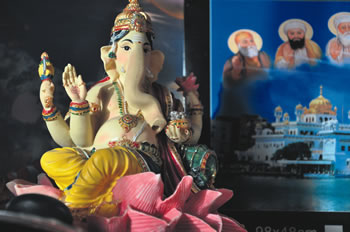 Miniature temple bells chime above.  As I wait for the next automatic door to usher me into the market, I look at the brightly-coloured party poster taped to the window, where you too can strut your stuff like a Bollywood star--at least for one night.

Right next to it is a cartoon image of Ali Baba. Ali earnestly reminds you to call home and lets you know that on his card a call to Pakistan works out to be a few pennies a minute.

All this happens at 10 a.m. when many Calgarians are only beginning to rise on a quiet Sunday morning; the OK General Store is already busy with customers.  OK is one of Calgary’s premiere sources for all things Indian; here I can purchase spices, cooking supplies and herbal hair oils that are used by my aunts back home in Pakistan.

There is also a barrage of fruits and vegetables: Gala apples, sugar cane, pomegranates, cauliflower and grapes are sprawled throughout the produce section. Above the produce are pots, pans, steel pressure cookers and ...god. For $39.99 you can bring home a porcelain figure of Ganesh, the elephant-headed Hindu god known as the remover of obstacles. The weight of Ganesh’s spiritual power feels heavy against my palm.  I hastily return Ganesh back to his perch.

Next to Ganesh sits Ram.  I take a quick peek and realize that he too sells for $39.99.  I am too scared to touch him; afraid of what would happen to Hinduism’s perfect man should my palms get too sweaty.

The majority of the store’s patrons are people just like my parents, self-ascribed as NRI’s (non- resident Indians). Men and women who browse through the mint leaves, sniff at cilantro and reach for jars of pickled mango.

For many of these shoppers OK Food & Produce is a portal to take them back home.

I say that Pakistan is “home” with a sense of trepidation. As a child, I knew that Pakistan was the place where my parents’ families came from. As I got older, however, this fact became blurred.

My father still regards Pakistan as home, and he anxiously awaits his retirement so he can “go back” and see his brothers and his one surviving sister again.

It’s simple for him; home is where his family is. My father was under two years old when Lord Mountbatten etched some lines in a map and created the single biggest human migration in history. Partition.

Because they were Muslim, my dad’s family left everything they knew in India to start a new life in Pakistan. There are Hindu and Sikh families from Pakistani side of the border, who mirror my father’s migration.

Dad doesn’t remember anything about leaving his ancestral lands in Patna and making his way across the new Indo-Pak border, swaddled in his mother’s arms. Although he grew up listening to tales of his aunts and cousins jumping into wells to avoid assault, my father was unable to picture exactly what happened.  Relatives turned into distant dreams while he went outside and played soccer with his neighborhood friends.

Like my father, my mother is also a survivor of bitter ethnic rivalry between Bengali-speaking and Urdu-speaking Pakistanis. At 13, just two years after my grandfather died, my mother, her siblings and my grandmother were removed from their home as a new nation began to rise out of East Pakistan, Bangladesh.

My mother rarely talks about what happened during the war.  Every time images of battle lines appear on CNN and the BBC, she snaps at us until we change the channel.

For my mother, Bangladesh was where she grew up in the lavish comforts suited to a princess.   Pakistan was more like an airport terminal, where she languished for eight years until she married and met my father. “How can I call a place that I only lived in for eight years as my home?” she tells me, “For me, Canada is more home than Pakistan, I have been here almost 30 years. My children were born here. My life is here.”

Recordings of Quranic verses are next to booklets describing numerous Hindu fasts. Here while being serenaded with the Sikh prayers; you can acquire rose-infused incense, packets of vermillion powder, and the latest Bollywood blockbuster to watch after morning prayers. Incidentally the star of the film is a Muslim.

Muslims Sikhs, Hindus and Christians that would not have interacted with each other back in India, congregate in this store. The men and women swap news, share stories and even make business arrangements in broken languages. Here the Bengali Muslim in his skull cap and the Punjabi Sikh in his turban use a combination of broken English and Hindi to speak – but in the end, they do communicate.

The store itself appears to be hybrid between the modern almost-laboratory cleanliness of North American grocery chains and the outdoor markets of Karachi, where vendors shout out their rates as the flies help themselves to first pick of the goods.

Even the noise level seems to promote a dual citizenship; the store is playing a Punjabi prayer as it will continue to do so until noon.  Then the sound tracks of the latest Bollywood film will replace the hymns.

A mother and daughter become their own tag team as they scour the shelves looking for the perfect afternoon snack, teasing each other in Kaachi about their choices while the Punjabi store owner snaps at his worker to place out the frozen samosas fut- a fut.

As convenient as it is for me to do all of my grocery shopping here, I can’t help but replay my mother’s warnings in my head: “Double check the expiry dates.  You remember what happened the last time you bought naan, don’t you?”

Warily, I review the expiration dates on the boxes of spices in my hands. The vegetable biryani is good until June 2011, the fish spice May 2010 and the chicken tika until September 2010. Knowing that I will not face another lecture at home, I make my way to the cash register where the cashier greets me, “Sat Sri Akal.”

I smile back and say, “Hello.”