Cory Archer: Being a Queen Ain’t No Drag 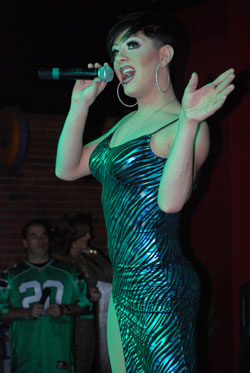 The show begins with waving spot lights and loud circus-like music playing from the speakers. The stage is adorned with potted plants, small indoor trees flank either side of the low stage and red theatre curtains hang along the roof. About 70 people, an equal amount of men and women, have come this Sunday night to watch five different drag queens perform at Twisted Element night club.

The fourth act, a lip-synching performance to a Rihanna song, is Chi Chi, or Cory Archer by day. He walks onto stage and waits behind the curtain for his number to begin. He is dressed in a long navy-blue dress with a black trench coat over top. His hair and makeup are impeccable, Archer makes a gorgeous woman, and it takes him hours before each performance to get ready. “It’s addicting, you get a sense of love for the stage. You have a passion in putting on that make-up every Saturday night,” said Archer.

Twisted Element is a gay night club located in Calgary’s downtown on 10th Street and 11th Ave. S.W. Every Sunday night, female impersonators take the stage and perform a lip-synching routine for the crowd that has accumulated.

A drag queen is a man who dresses and acts like a woman for the purpose of entertainment. Certain features, like lips or eyelashes, and mannerisms are often exaggerated for a dramatic effect. “It’s really fun to watch, these guys have a lot of courage to go up there and perform so well in front of everybody,” said Chelsea Boutillier, who was in the audience watching the drag show. Archer performs in drag, not because he wants to look like a woman, but because he loves to entertain people and he loves to perform in front of an audience, it provides him with a sense of excitement and accomplishment.

Becoming a drag queen was only a natural progression for Archer, age 20, who while growing up, was a world champion baton twirler. Archer came out as gay, or as a “walking pride parade,” as he likes to say, while still a teenager. Most of his family supports him, with his maternal grandmother being his main support and his mother having attended one of his shows in the past. However, some of his family, like his father and step-mother, isn‘t as accepting of his lifestyle. “I handled them fine and I really couldn’t care less what they think.” “But of course it still hurts when people don’t accept you but you learn to get over it,” said Archer of his father.

While sitting around an August campfire with some friends, most of whom are gay, I first heard of Cory Archer. They spoke about Chi Chi with a tenor of admiration and told stories about the courageous and sometimes funny things he had done. I asked my best friend, who works with Archer at the downtown Telus call-centre and who is also gay, to introduce me to Chi Chi so we could discuss his life as a gay man and drag queen in Calgary. He agreed and invited me to his home.

Walking towards the quaint, rented bungalow, on a street just off Edmonton Trail, the front door opens and a man, who hasn’t seen me yet and could only be described as flamboyant, begins to do cartwheels down the walkway leading to his home. This must be Archer. He stands, with amazing straight posture, about average height, with short brown hair, a neatly shaven face, and hands that gesture in a wispy sort-of-way when he speaks. Archer finishes a cigarette, and he invites me into the bungalow he shares with three roommates. The house is clean and simple and Archer just recently just moved in. We can speak while he organizes his new drag room, he says. A drag room is a room where he keeps his gowns, short dresses, tank tops, and high heels.

Archer represents a young, gay man in Calgary, albeit, a very flamboyant one. By day, Archer holds down a full-time job at the Telus call-centre downtown, and when we met, was wearing jeans and a black t-shirt. By night, he’s Chi Chi, performing on stage at Twisted Element. While Archer unpacks the bags for his drag room, he pulls out and hangs up a black and blue sequined mini-dress, faux-leather skirt, feather boas, and a bright orange and pink floor-length gown. “Obviously I love women’s clothing, and the make-up and everything like that. I am a huge gay boy and I still wear make-up when I am out of drag.”

Archer was born in Invermere B.C. in 1989. His mother, Kim Green, was 15-years-old when she had Archer, so he was raised for the most part by his grandmother, Rose Green, while his mother finished school. Archer’s father was around for the few first years of Archer’s life, but his parents did eventually separate and both parents have since remarried.

Archer’s grandmother always knew he was gay. It was apparent in his actions, he was always with girls, and she just always had an inkling. “I just let him do his own thing, until he got brave enough to tell his mom,” said Green. 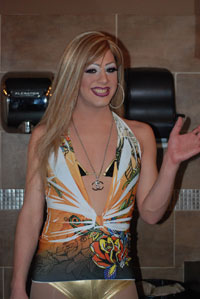 Archer told his mother he was gay after a fight when he was 16-years-old. They had gotten into an argument after his mother wouldn’t allow him to travel to Vancouver to visit some friends, “It was basically a screaming match and me screaming back ‘what don’t you get? I’m gay!’ and I slammed the door and walked out of my house, got in my 1997 Cavalier and spun gravel right back at her car.” He returned home at four o’clock in the morning and left a note for her, explaining that he really was gay and he was sorry. “And the next day she was fine,” added Archer. Archer had specifically asked me not to discuss this with his mother, as he feels it still upsets her.

Archer was always a performer, even as a child. “Even when he was little, he used to roll on the floor and pretend to do stunts and wait for us to applaud him. If we didn’t applaud loud enough he would get upset,” said his mother Kim. His baton twirling coach in Calgary, Loranne Meek, echoed similar sentiments: “Cory was a hand full. He always needed attention and always wanted to be watched. As long as he had an audience to perform or practice in front of he was at home.”

Archer began his performing career in baton twirling because he knew he would get more satisfaction from it than anyone of his male peers would get from playing a sport like hockey.

Meek describes baton twirling as combining technical training, manipulation of the apparatus, intricate choreography, musicality, and performance simultaneously by the athlete. In his most successful season, Meek said he was twirling and dancing 20-plus hours a week on top of finishing his schooling. “I would say his ability to juggle all of these abilities simultaneously now allows him to be a charismatic stage performer because now he can fully focus on his performance abilities only,” said Meek. Archer retired from baton twirling because he believes he has gone as far in the sport as is possible, aside from teaching. Meek teases him, saying he will return to twirling in the future. “For now, I love to see him perform in drag on stage and continue to support him however I can. He is like a son to me.”

Archer has travelled to Japan, Spain, Rome, and the United States competing in the baton twirling world championships. Archer was on team Canada, created by the Canadian Baton Twirling Federation, from the age of 12 until he retired from the sport at 18. “I went to six world championships and I was 12 when I did my first,” which was in Saskatoon, said Archer. Archer then traveled to Spain in 2003, Japan in 2004, the United States, where he won a bronze medal in 2005, Italy in 2006 and finally Hamilton in 2007 in the World Baton Twirling Championships. 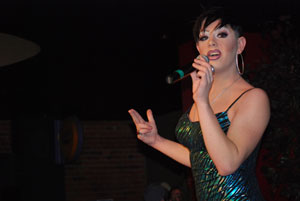 Archer began performing as Chi Chi in 2007. He had just moved to Calgary from B.C. to train with Meek, but had recently retired from baton twirling. Archer would dress up in drag with his friends and go watch the drag queen shows or perform in the basement on the open stage at Twisted Element. “Watching them I decided I was pretty enough in drag that I wanted to do it as well.” Six months later, Chi Chi was performing upstairs at Twisted Element. “That was a really quick evolution of a drag queen, it doesn’t happen that quick, ever,” Archer explained.

To Archer, being a drag queen isn’t about looking like a woman, it’s about the performing aspect. Archer said it is something you can never retire from. “This is something you can’t get out of now, you can’t stop being a drag queen. They can try and retire all they want but they’ll be back someday.” “Chi Chi is mine to keep,” said Archer with a smile.

The music has started and Archer bursts out from behind the curtains. You can tell he thrives on performing, and his act is full of energy. The song begins slowly but as the music progresses in intensity, so does Archer’s act. He throws off his trench coat, the crowd cheers, and Chi Chi gives a small grin before continuing his performance of lip-synching and dancing. One can’t help but smile while watching Chi Chi, his performance is entertaining, full of talent, and there is absolutely no fleck of nervousness in his flawless movements. He finishes his act and walks off the stage to the crowd loudly applauding.